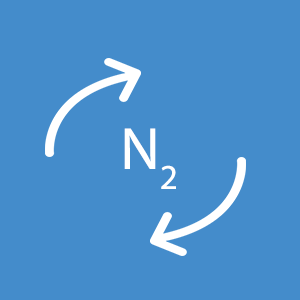 • Nitrogen is required for the production of nucleic acids, proteins, amino acids etc
• Despite the high content of nitrogen in the air (~78%) it is too stable for it to be used directly
• Plants uptake nitrogen through nitrate ions (NO3-) from the soil through active transport. It is here that nitrogen is then entered into the food chain as consumers then digest the plant and thus obtain its nitrogen.
• Nitrate ions are very soluble and are added into the soil greatly by the decomposition of plants and animal matter. It is also added in fertilisers
• Nitrate ions must be in aqueous conditions to enter the xylem vessels by the root hair cells of the plants

Ammonification
• Production of ammonia from organic ammonium containing compounds
• Ammonification usually occurs in the production of Urea (which contains a high concentration of amino acids), proteins, nucleic acid and vitamins ( found in faeces and dead organisms)
• Saprobiotic microorganisms (greatly fungi and bacteria) feed on the material and thus release the ammonia which later form ammonium ions in the soil
• It is through ammonification does nitrogen return back to the non-living component of the ecosystem

Nitrification
• Nitrification is the product of nitrifying bacteria chemical reaction to produce energy.
• However, in doing so do they convert ammonium ions into nitrate ions in an oxidation reaction
• The oxidation reaction is a two stage reaction:
1) Oxidation of ammonium ions to nitrite ions (NO2-)
2) Oxidation of nitrite ions to nitrate ions (NO3-)
• Nitrifying bacteria are aerobic, and therefore require oxygen to be present within the soil, hence why ploughing is important to ensure the soil is aerated. Good drainage is also required to ensure water does not fill spaces and prevent air being forced out of the soil
Nitrogen Fixation
• Nitrogen gas is converted into nitrogen containing compounds.
• It can be produced industrially as well as naturally through lightning passing through the atmosphere
• However, the most significant form of nitrogen fixation is through microogranisms:
o Free-living Nitrogen Fixing Bacteria: bacteria which reduce gaseous nitrogen into ammonia. The ammonia is then used to produce amino acids. Nitrogen rich compounds are released from these when they die and decay.
o Mutualistic Nitrogen Fixing Bacteria: Bacteria which live in nodules on the roots of plants, such as peas and beans, they obtain carbohydrates from the plant in exchange for amino acids from the bacteria
Denitrification
• When soil becomes waterlogged and thus there are anaerobic conditions the nitrifying bacteria, which are aerobic, cannot function and there is thus an increase in anaerobic denitrifying bacteria
• Denitrifying bacteria convert soil nitrates into gaseous nitrogen
• Ultimately, this reduces the availability of nitrogen containing compounds for plants