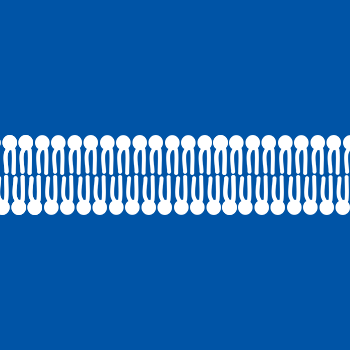 Phopholipids are made up of two parts, the ‘head’ of the phospholipid is hydrophilic, and thus loves water, whereas the ‘tails’ are hydrophobic and thus repels water. They organise themselves in the above fashion so that the ‘heads’ are in water, and the tails are not. Phospholipids allow for simple diffusion and osmosis.

Cholesterol is found within the membrane, this helps ‘pack’ phospholipid into membranes which give more rigidity to the membrane. The Steroid Molecule Cholesterol gives the Plasma Membrane in some Eukaryotic Cells stability by reducing the fluidity and making the Bilayer more complete. For example in artic fish, they have large amounts of cholesterol so their cells do not freeze.

Integral proteins act as a transport of various molecules that otherwise would not be able to move across the membrane. The identification of the cell is another function for recognition by other cells; the antigens on the cell.

The ion channels open and close in order to let ions pass through the membrane into the cell. The ion channel also allows for communication to other cells.

Phospholipids form a bilayer, where the hydrophilic beads of both phospholipids layers to the outside to the cell surface attracts water on both sides. The hydrophilic tails repels water.  This allows for lipid-soluble substances to enter or leave the cell. It prevents water soluble substance entering and leaving as well as make the membrane flexible and self-sealing

Proteins act either to give mechanical support to the membrane or in conjunction with glycoproteins, as cell receptors for molecules such as hormones. Some make up protein channels which form water filled tubes to allow for water soluble ions to diffuse across. Carrier proteins bind to ions or molecules like glucose or amino acids. They provide structural support, channel transporting water soluble, allow active transport, form cell surface receptors for identifying other cells, help adhere cells together and act as receptors

Cholesterol is found within the phospholipid bilayer, it adds strength to the membrane. They are very hydrophobic and thus help with water loss and ions. They pull together the fatty acid tails of the phospholipid molecules, limiting their movement and that of other molecules but without becoming too rigid. It reduces lateral movement of other molecules include g phospholipids, makes the membrane less fluid at high temperatures, prevents leakage of water and dissolved ions from the cell

Glycolipids are made from carbohydrates covalently bonded with a lipid. The carbohydrate portion extends from the phospholipid bilayer. The watery environment outside the cell, acting as a cell surface receptor for specific chemicals. Glycoproteins act as a recognition site, maintains the stability of the membrane and helps cells to attach to one another thus forming tissues

Glycoproteins are made from carbohydrate chains that are attached to many extrinsic proteins on the outer surface of the cell membrane. Glycoproteins also act as a cell surface receptor, especially for hormones and neutralisation. They help other cells bond together and allow cells to recognise each other.