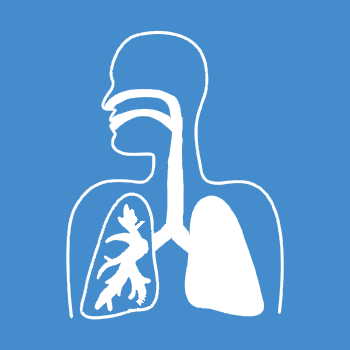 Air enters through the nostrils and mouth passing through:

Adaptations of the Lungs

Purpose of the Respiratory System

Humans require an efficient, large gas exchange system as they are large in size with a, in comparison, small surface area. Humans have trillions of cells (37.2 trillion to be precise) making it impossible to gases to simple diffuse through their membranes, like a single celled organism. The high demand for oxygen is the result of our high metabolism that needs to fuel, for example our 37.5oc body temperature and other measures to ensure homeostasis.

Features of the airways

The trachea and the bronchioles are lined with cartilage which prevents the airways from collapsing when under pressure, such as when the person lies flat. Lined on the walls of the airways are goblet cells which produces mucus which traps any foreign dirt/pathogens from getting into the lungs. The cilia then move the debris out of the body or down into the stomach to avoid further infection.

Exchange of Gases in the Lungs

The site of gas exchange in a mammal is the epithelium of the alveoli. The alveoli air scars are 100-300µm in diameter

Disease of the Respiratory System

What is the cause of Pulmonary Tuberculosis?

Pulmonary tuberculosis is the result of a bacterial infection; Mycobacterium tuberculosis.

There are two branches of tuberculosis:

Latent TB – the bacteria remain in the body in an inactive state. They cause no symptoms and are not contagious, but they can become active.

Active TB – the bacteria do cause symptoms and can be transmitted to others.

Tuberculosis (TB) bacteria can lie dormant in the body for weeks or even many years, causing no illness in 90 to 95 percent of infected people.

What are the symptoms of pulmonary tuberculosis?

While latent TB is symptomless, the symptoms of active TB include the following:

Tuberculosis usually affects the lungs, but can also affect other parts of the body.

How is pulmonary tuberculosis transmitted between individuals in the population?

Pulmonary tuberculosis is transmitted through water particles that someone with TB produces (e.g. When a person with TB of the lungs or throat coughs, sneezes, sings or talks, droplets containing the bacteria are released into the air.)

How does the disease develop within the body?

Tuberculosis usually strikes the lungs, and eventually a hole can develop in the patient’s lung. Air or fluid may accumulate between the chest wall and lungs, causing the patient to have chest pain and feel short of breath. In some cases, the bacteria may spread through the body and damage other organs. If not treated, tuberculosis can be fatal.

What is fibrosis, asthma and emphysema?

Pulmonary fibrosis scars and thickens the tissue around and between the air sacs (alveoli) in your lungs. This makes it more difficult for oxygen to pass into your bloodstream. The damage can be caused by many different factors — including long-term exposure to certain toxins, certain medical conditions, radiation therapy and some medications.

The 3 types of Fibrosis:

Asthma is a common, long-term or chronic, disease. It affects about five million people in the UK. Asthma often starts in childhood, but it can happen for the first time at any age. Asthma affects the airways – the tubes that carry air in and out of your lungs. If you have asthma, you have very sensitive airways that become inflamed and tighten when you breathe in anything that irritates your lungs like smoke or allergens like pollen. This can cause chest tightness and wheezing and make it harder to breathe.

Emphysema is a long-term, progressive disease of the lungs that primarily causes shortness of breath due to over-inflation of the alveoli (air sacs in the lung). In people with emphysema, the lung tissue involved in exchange of gases (oxygen and carbon dioxide) is impaired or destroyed. Emphysema is included in a group of diseases called chronic obstructive pulmonary disease or COPD (pulmonary refers to the lungs). Emphysema is called an obstructive lung disease because airflow on exhalation is slowed or stopped because over-inflated alveoli do not exchange gases when a person breaths due to little or no movement of gases out of the alveoli.

How does Fibrosis, asthma and emphysema affect lung function?
Cystic fibrosis causes the mucus that coats the breathing tubes to become so thick and sticky that the cilia are unable to sweep the germs and other particles up and out of the lungs. The trapped bacteria lead to frequent, serious infections and permanent lung damage. In response to infections, the body’s immune system sends white blood cells to the lungs to attempt to destroy the infection. White blood cells release chemicals that kill both bacteria and surrounding normal cells. After attacking the bacteria, the white blood cells die, adding to the thickness of the mucus and destruction of the airways.

In the upper respiratory tract, thick, sticky mucus may also clog the nasal passages and sinuses. Small growths, or polyps, on the inner lining of the nose may develop from repeated infection and inflammation.

Asthma causes airway obstruction, during normal breathing, the bands of muscle that surround the airways are relaxed, and air moves freely. But in people with asthma, allergy-causing substances, colds and respiratory viruses, and environmental triggers make the bands of muscle surrounding the airways tighten, and air cannot move freely. Less air causes a person to feel short of breath, and the air moving out through the tightened airways causes a whistling sound known as wheezing. Causes Inflammation. People with asthma have red and swollen bronchial tubes. This inflammation is thought to contribute greatly to the long-term damage that asthma can cause to the lungs. And, therefore, treating this inflammation is key to managing asthma in the long run.

Asthma also causes Airway irritability. The airways of people with asthma are extremely sensitive. The airways tend to overreact and narrow due to even the slightest triggers such as pollen, animal dander, dust, or fumes.

Emphysema changes the anatomy of the lung in several important ways. This is due to in part to the destruction of lung tissue around smaller airways. This tissue normally holds these small airways, called bronchioles, open, allowing air to leave the lungs on exhalation. When this tissue is damaged, these airways collapse, making it difficult for the lungs to empty and the air (gases) becomes trapped in the alveoli.