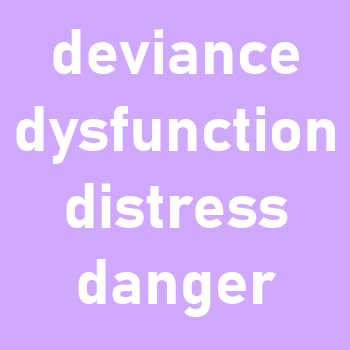 There isn’t a clearly defined boundary between unusual behaviour and mental illness, what’s considered a mental illness can be quite subjective, and it can vary between people and cultures. To attempt to solve this, psychologists came up with four things to consider about a behaviour during mental disorder diagnosis. These are known as the 4 D’s: Deviance, Dysfunction, Distress and Danger.

It should be noted that most psychologists would only consider any of these behaviours a mental illness if they persist over a long period of time. It could be said that everybody suffers from these types of behaviours at times.

The four D’s were a good first step to begin to standardise mental diagnosis, as they clarified what exactly should be considered about a person’s behaviour when deciding whether it’s a mental illness. However, the psychologist should consider all four of the issues during diagnosis, to ensure standardisation.

On the other hand, one major issue with this system is the subjectivity of it. What defines dysfunctional behaviour? What behaviour is considered abnormal? You’d receive different answers from different people, making it a very subjective way of definining a mental illness.

Finally, many mental illnesses are not rare at all, and therefore would not be considered ‘deviant’ behaviour, such as depression.